I’m holding on to you,

But what if space

Is what I need? I may be

But my presence isn’t present.

Don’t you love me?

She sits on the wooden shelf

An unwelcome grin etched on to her face

As the people around her

Mill around the house

Go about their day

And pay her no attention.

Patiently with her stiff limbs

When they come home

They’ll pick me up off of the shelf

And play with me.

The family trudges in

And they begin to mill around the house

And go about the rest of their day

Without a glance at the shelf

Where the doll sits by herself

Sits on the playroom floor

The children run around outside

Playing games they’d get in trouble for playing

If only they weren’t

The parents are cold and

They have grown out of love

The dollhouse is falling apart.

The roof is collapsing

The support beams are cracking

Termites have destroyed the foundation.

And all the while,

The kids are playing outside

Thrust into the adult world

And so began a torrid love affair 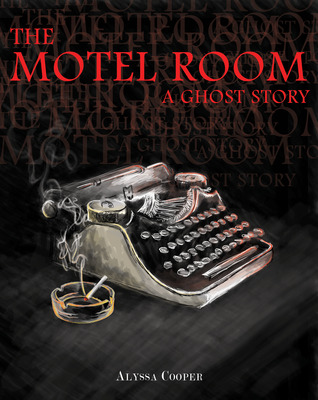 Despite the haunting front cover and the subject matter within, “The Motel Room” is not a horror story. Alyssa Cooper delivers a wonderfully crafted short story about life, and how even the absence of life can be seen as beautiful.

A tragic accident has occurred, leaving a man’s soul stuck inside the Motel Room where he and his wife used to spend their anniversary. Nobody can see him, so his days go by in a blur. Every day seeming just like the one before it. Through a series of events, he begins to discover his true power and realizes how freeing “living” without a body can truly be. He discovers happiness by abandoning his sadness and rediscovering the beauty that the world holds. Truly a heartbreaking tale about the journey of a soul!

To see more about Alyssa Cooper and her works, visit her site at http://alyssacooper.ca/

My collection of Picoult books

Anyone that knows anything about me will know that my favorite author, hands down, is Jodi Picoult. That being said, I was very excited to read Lone Wolf when it came out.

Lone Wolf is about a man that has spent his life dedicated to researching wolves. Luke Warren spent two years in the Canadian wilderness furthering his education on wolves and living with them as one of their own. When he returns home, his family slowly falls apart over the course of several years until a fatal accident occurs. With society’s beloved Luke Warren in a coma in the hospital, who is to decide his fate? His estranged son of six years? Or his daughter that is underage? Lone Wolf asks the reader: Who has the right to decide your fate when  you’re not capable of doing it yourself?

Lone Wolf was a gripping read. I enjoyed reading the perspective of the different characters, specifically the memories from Luke Warren himself. It was a little bit confusing why there were flashbacks from Luke Warren since he was in a coma, it lead me to believe that he was either going to wake up or they were left behind in a journal somewhere, but this wasn’t revealed to the reader.

There were a couple things that the book kept secret for quite a while: Why did Edward really leave his family? What happened during the accident that Cara is keeping a secret? I felt as if it took longer than it should have to let the reader in on the secret’s of the family. It made the reading go by a little bit slower because it didn’t flow as naturally. Also, when they were revealed, it made all the difference and brought tears to my eyes; specifically Cara’s secret of why she was holding on to her dad’s life so dearly.

Overall, I would rate this book an 8/10. It wasn’t my favorite Picoult book, but it was interesting to read and kept me intrigued throughout. Also, the knowledge of wolves was very impressive and gave this book an edge that I haven’t read in a while.